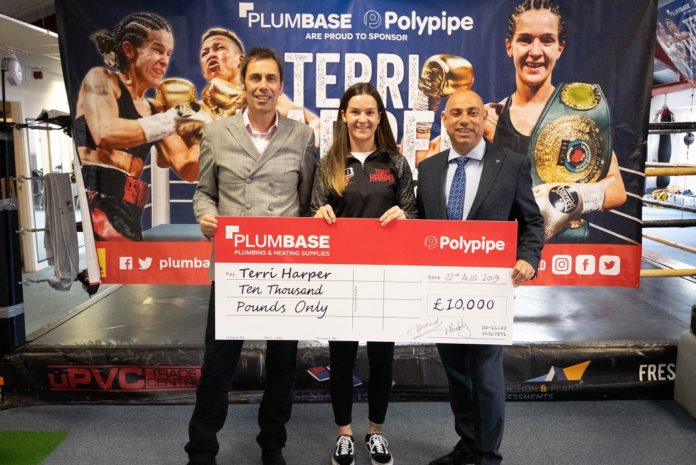 Two of the heating and plumbing industry’s leading brands have announced a joint sponsorship deal with one of British boxing’s rising stars, ahead of what promises to be another heavyweight heating season.

The sponsorship will give both brands a presence on Harper’s ringwear during what promises to be a thrilling next 12 months for the 22-year old, who recently secured her status as the youngest ever female world boxing champion.

The sponsorship deal is rooted in Yorkshire, with Harper originating from Denaby, South Yorkshire, just a short distance from both Plumbase’s Sheffield branch and Polypipe’s Doncaster head office. Having been proposed by Plumbase’s Sheffield branch manager, Steve Doran – a close family friend of Terri Harper – the sponsorship will see the two local businesses help to secure Harper’s status as one of the UK’s most promising professional athletes.

On her latest sponsorship deal, Terri Harper said: “It means a huge amount to receive the backing of two local businesses. Athletes in most sports would dream of the kind of support I’ve already been given by Plumbase and Polypipe, and I count myself as being very lucky to be backed by businesses with such strong roots in my home county. Thanks to their support, I can focus on training and becoming the best boxer I can be.”

Mark Bradley, managing director at Plumbase, added: “We want to help everyone we work with to fulfil their potential and our sponsorship of Terri is testament to that. We’re urging as many people as possible from the heating and plumbing industry to give Terri the backing she deserves, as she bids to become one of British sport’s household names.”

Tariq Ahmad, sales director at Polypipe, said: “We’re a proud Yorkshire business and jumped at the chance to sponsor one of our region’s rising stars. The year ahead promises to be massive for Terri, and we’ll be looking to help her rise to the top in every way we can.”

Installers cash in on Plumbase competition

Trade liaising on return to work