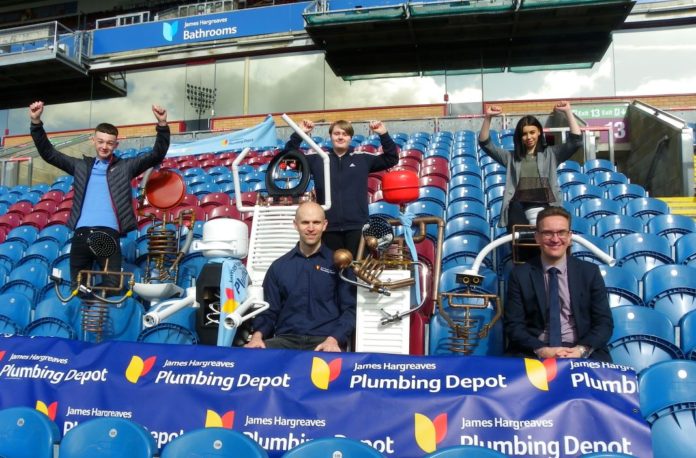 An independent plumbing and heating firm has ‘figured out’ a novel way to get football fans back into the Premier League stand that has carried its name for more than 20 years.

The community project, instigated by James Hargreaves Plumbing Depot, has resulted in a new generation of supporter models made out of sinks, pipes, boilers, taps and other plumbing, heating and bathroom products – at Turf Moor, home of Burnley FC.

The specially-engineered, life-size fan figures have been designed and built by apprentice plumbers studying at nearby Burnley College to sit proudly in the main stand, which has been sponsored by James Hargreaves Plumbing Depot since the 1990s.

“It’s been a real team effort, and what a result,” said Gordon Rothwell, MD of James Hargreaves Plumbing Depot. “We had the idea late last year when it became apparent that football stadiums were set to remain empty of fans due to the pandemic.

“We are based in Burnley and a large number of our staff, like myself, are lifelong fans of the Clarets. Turf Moor can be seen from our premises, and it was sad to see the ground empty on matchdays.

“We wanted to show our support for our club and we were also conscious that it has also been a difficult period for young apprentices coming through. Therefore, the idea of working with them and using their newly-acquired skills to create something for our club and community felt good.

“We all thought that building supporters from plumbing materials seemed a fun thing to do. The club and the college really bought in and the figures look spectacular.”

The ‘fans’ include men, women and children – even a baby – and also a sports commentator for when games are televised.

David Lord, head of construction at Burnley College said: “It’s been a tremendous project for us and everyone – students and tutors across both our plumbing and creative departments – have thoroughly enjoyed the involvement. A lot of thought and attention has gone into the creation of the figures, and we think the real fans and players will love them.”