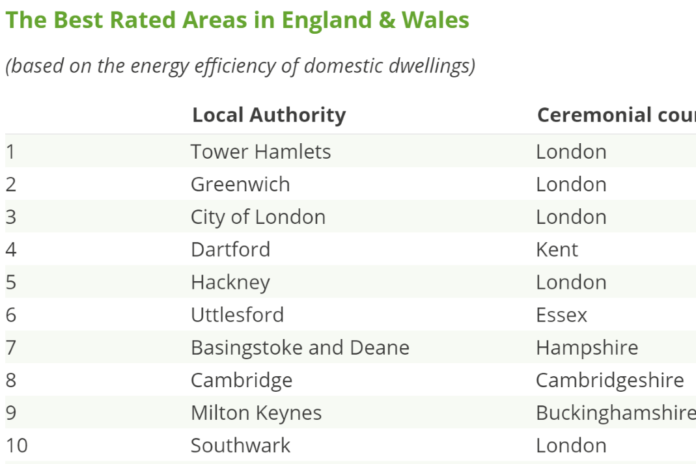 Britain’s houses are some of the oldest and coldest in Europe and the cost of heat that leaks from properties is leading to a rise in fuel poverty.

Because of this, Everest conducted an analysis of over 15 million properties across the country revealing the areas that are the most and least energy efficient based on EPC ratings.

Despite being one of the most expensive places to live – London is home to the most energy efficient properties in the country (most A- & B-rated EPCs).

There has been significant investment in London and Tower Hamlets specifically from local governments.

Despite being one of the most economically disadvantaged areas of the UK, Tower Hamlets has been part of The London Plan and London Climate Change Action Plan striving to ensure that the area has the highest standards of energy efficiency for new build development of any city in the UK. Because of this, Tower Hamlets and areas surrounding the capital have the highest EPC ratings.

When looking outside of London, Dartford (Kent), Uttlesford (Essex), and Basingstoke and Deane (Hampshire) are amongst the top 10 best areas with the most top rated EPCs.

Homes with an A- or B-rated EPC spend on average £1,104 on their energy bills over 3 years. And those that are benefiting from cheaper bills, are situated within or near the capital. However, the data shows that just 19,832 dwellings benefit from an A- or B-rated EPC.

Most dwellings have a D rating that has energy costs, on average, of £3,228 across 3 years.

There are 6,136,001 dwellings in England Wales with an average D-rated EPC. However, the problem lies amongst the lowest rated homes. 1,042,075 dwellings across the country received an F- or G-rated EPC making them the LEAST energy efficient houses in England and Wales. Those living within these homes are paying on average £5,743.50 for their energy bills across 3 years – 3.5 times more than those with an A- or B-rated EPC.

Isles of Scilly, Gwynedd, and Ceredigion are the three worst areas. A huge 35% of properties within the Isles of Scilly received an F- or G-rated EPC – the worst grade possible.

Most properties across the west fringes of the country are not suitable for cavity wall insulation due to the fact they are highly exposed to wind and driven rain. This can cause problems with damp and mould in the walls and affecting the health of homeowners living in the dwelling.

Everest gathered seven example EPCs across the performance ratings to see the estimated energy costs of a dwelling for three years. The analysis shows there’s a drastic cost difference, between those with a C- and D-rated EPC (52%), and those rated F or G (35%).

SAP 10 to increase demand for electrical